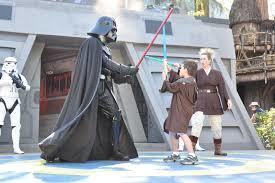 I am often teased when I use the word “otherness.” Some say I am making it up. I assure you, I am not. Otherness is a word.

We had heard of Jedi Training at Disneyland. Jedi Training is where kids are randomly chosen from a huge crowd of on-lookers, and those few that are selected are given the opportunity to be “trained” by Jedi masters to take on Darth Vadar in a light-saber battle. Both Kelsey and Chase had dreamt of being chosen. They wanted so badly to get the opportunity to walk the line between fantasy and live action.

It was our second family vacation to Disneyland. Chase was 9 and Kelsey was 14. Both were avid Star Wars fans. As the moment of selection approached, literally hundreds of people crowded in to the training arena. Jedi trainers stood before the crowd, all eager to participate. Each child standing up straight, and with great energy raising their hands, hopping up and down, trying to win the favour of the trainers in order to be selected. Both Kelsey and Chase had hands raised high.

I had this mother-tinge in my stomach. What if only one of them got chosen? Whoever was left out would surely feel devastated. I may have had a moment where I secretly prayed that neither would be chosen, so as to avoid sibling unfairness. I noticed the training spots were filling quickly, and there were only a few more spaces available. The trainers were looping back toward our kids again. This time when I looked over at the two of them I saw it.

Otherness is the continual payment of love toward another – and I was looking right at it in the middle of the crowd. There stood two excited and energetic kids waving their hands. Chase was bouncing up and down with great hope on his face. Behind him, his sister, equally eager in her stance, but her hands were pointing toward her brother, and I could hear her yelling, choose him! Choose my brother! Pick him!

This time when I looked over at the two of them I saw it. It was otherness. Otherness is the continual payment of love toward another – and I was looking right at it.

She was practicing otherness in that moment. And when her brother was selected, she rejoiced in his pleasure. As a mom, I rejoiced that my daughter had tasted in that experience the ministry of otherness. She was undistracted by her own position, her own opportunity. She instead participated in making one of the continual payments of love to another, and in doing so, bore the seal of the Kingdom of Heaven.

Our call is to live as citizens of the Kingdom of God. It is the only Kingdom to which we truly belong. It is where the loving and Supreme Kingship of Jesus touches absolutely everything, and where we fully experience Jesus as Lord as we carry out His mandate of otherness. I pray you taste it, experience it, share it as you walk with Jesus.

Otherness is a word – and surely it is His word.